Jennifer Brenon, top pet groomer to the Stars, for HOLLYWOOD GROOMING, the #1 rated mobile pet grooming service in LA by LOS ANGELES MAGAZINE, saved the life of her two pound, fuzzy canine friend and client, “LILA” after breathlessly working for ten minutes on her with CPR to revive her precious little life after a potentially fatal event. 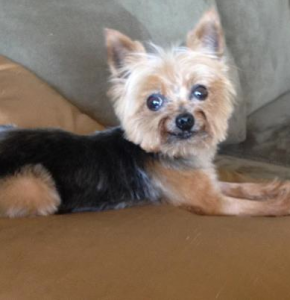 “I arrived at LILA’s house for her usual Pet Spa Day appointment which she loves. But, something felt different that day. I picked up LILA to cuddle her and say “Hello” as usual before I began her grooming, and found it strange when she started “nuzzling” and rubbing on me. LILA is NOT a nuzzler!”.

Jennifer suddenly realized that LILA was not breathing and was unconscious with no vital signs. She immediately sprang into action and started CPR. Due to Jennifer’s past training in CPR and as a Vet Tech she knew exactly what to do. “I felt as if time had stood still as I seemingly watched myself urgently work on poor LILA’s tiny, listless body…”

Once LILA regained consciousness and while in the car on the way to the 24 hour emergency vet, she went immediately into a violent seizure, emitting throaty groaning noises, head spasms vertically left to right. Being instructed to never move a patient in the throes of a seizure, all Jennifer could do is watch LILA painfully and helplessly until the seizures passed to make sure that she did not choke. The trauma of whatever episode LILA had just gone through sent her into cardiac arrested while IN THE CAR and Jennifer fought to bring her back to life AGAIN!

Jennifer still shivers as she recalls that traumatic day; “The ER doc showed me an x-ray of LILA’s throat area and it revealed an obstruction. There had been a foreign object that collapsed LILA’s tiny trachea immediately cutting off the oxygen, causing her to go into cardiac arrest and lose consciousness”.

The TLC and CPR Jennifer had administered had dislodged the obstruction enough from the airway to allow oxygen to flow through LILA’s tiny body once again bringing her back to life.

“I never in a million years thought I would experience anything like this…” Jennifer recalls. “But, I do suggest that everyone, especially with children and animals take a lifesaving CPR class! LILA changed and inspired MY life that day…more that words can ever express. We will be soul mates FUR-ever.”